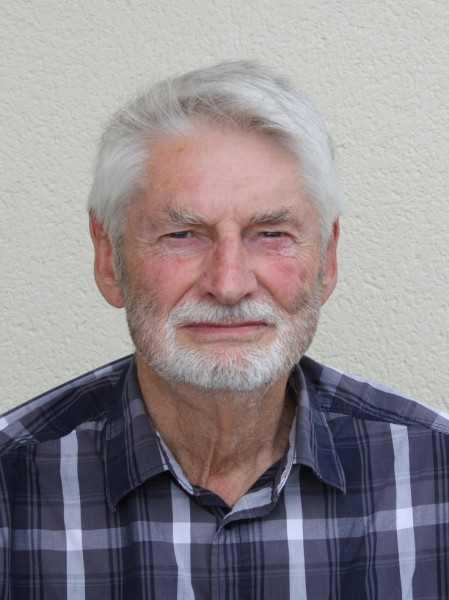 Cedric Green is an artist and print maker living and working in France, concerned about health and about the environment. He is also a man of many talents that are partially reflected by his international history. He was born in Mozambique, Africa. He soon moved to Southern Rhodesia and eventually trained in architecture at the University of Natal.

In 1962 he relocated to Great Britain where during a period of 30 years he produced buildings, drawings, designs, sculpture and paintings, and also taught at the Cheltenham School of Art, and Sheffield University in England. In the 80’s he became fascinated by printmaking, and acquired the basic technical skills. He soon moved to France, restored an old farmhouse for home and studio and began working full-time in 1991, painting and making experimental prints.

The examples of prints shown here mark recent stages in the development of an individual technique which uses a wide range of methods—copper and zinc plates printed in *intaglio and relief, monotypes sometimes combined in the same print. His methods mix spontaneity of creation and execution, precision, controlled accident, and a search for ways of expressing ideas which have been a preoccupation of his for many years.

* A printing process that uses an etched or engraved plate; the plate is smeared with ink and wiped clean, then the ink left in the recesses makes the print. 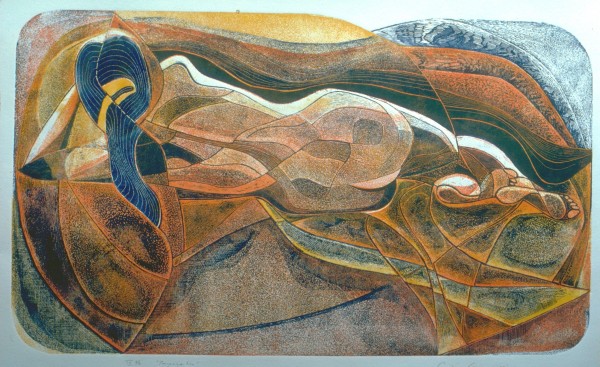 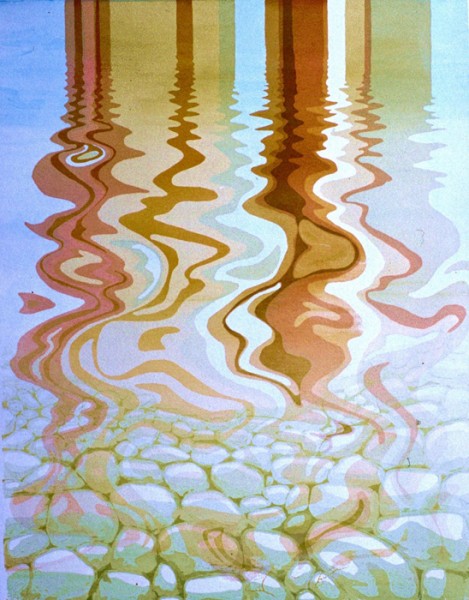 A recurring theme is Atlantis, Plato’s mythical utopia destroyed by flood as a punishment for people’s arrogance, a relevant myth for our time. Many of his prints and paintings are based on the ambiguity, distortions and complexity of reflections in water or in the imperfect mirror of memory. Musical ideas are important to him and appear in the frequent use of variations on a theme. http://greenart.info/green/

The Politics of Printmaking

Cedric’s printmaking technique (and enjoyment of printmaking) was transformed by the rediscovery of 19th century electrolytic printing plate-making processes— originally named Electro-Etching and Galvanography. He uses the term “galv-etch” and other names using the prefix “galv” to distinguish particular contemporary application of these old techniques. He is resolutely opposed to attempts to patent and restrict the use of methods that have been known and used by printers and etchers for 150 years. For more information about Cedric’s printmaking ideas go to http://greenart.info/galvetch/contfram.htm

If all of this work did not keep him busy enough, he just took three years off to build an ecological house and studio where he now lives and works. Click here to see Building a Solar House in France. http://greenart.info/theves/

I have always been enchanted and captivated by art of all kinds.  I am especially drawn to looking at paintings and how they were created. I like to try to imagine the motivation behind a particular painting that I am examining. When I first started painting, I had no idea of motivation or why some artists choose particular subjects to explore. I did not begin to paint seriously until I was an adult. I took my first painting class for two reasons. One, it was taught in France, and two in emphasized creativity, not technique. It was a perfect class for me because I was creative, but had no technique what so ever.

I have read many examples or talked to artists who have purged their first attempts painting. I once went to a workshop where one of the teachers said “If you have paintings in your studio that are not any good, get rid of them, burn them”. I, however, disagree. Yes, I have certainly painted over works that I was never going to be able to fix. But I have kept many of my first and early paintings because they remind me of how hard I was trying to create something, how emotionally involved I was with my subject, or how proud I am that my first attempts.  They were so primitive and amateurish, but I love that I was doing my best. Also, there was already a glimpse of my palette, my technique and the subjects that moved me then and now. Here is an example of one of my very first paintings in France. I love this painting, because I remember where I was while I was painting it, where I was sitting, the fact that I was alone, how I was enchanted with this old ruined house and how much I enjoyed putting paint on canvas. 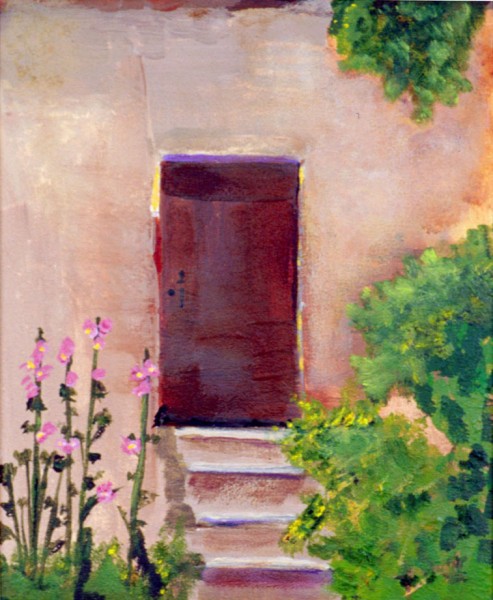 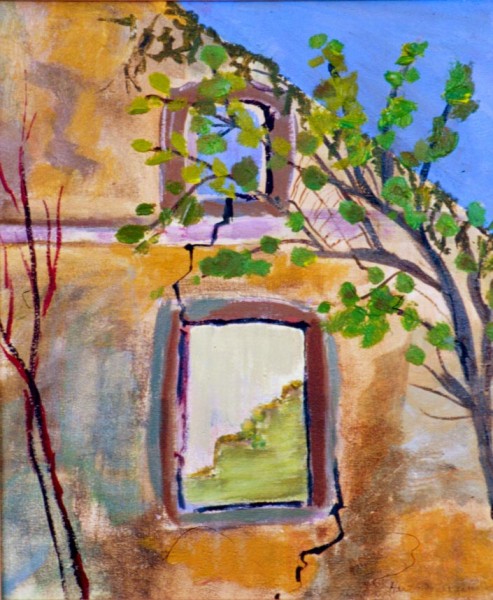 This French workshop took place in a medieval village in the southwest of France. There many things calling to be painted. This very old door was one of the last of my paintings on this trip.

After many classes and mentors, and spending time by myself making mistakes on canvas and then realizing how to fix them, I am now a painter, and artist who paints in order to touch that sometimes not so quiet voice in my head.

I have had a love affair with France for about 30 years. Loving France is somewhat of a cliché I know, nevertheless, it has never failed to disappoint me. I am very fond of Paris, but as a nature lover my heart lies in the countryside with rolling green hills,  rugged cliffs and incredible trees. I also love France’s food, climate, history, people and its culture in general.

Some of my most fascinating experiences while there involved visiting three of the many prehistoric caves that dot the southwest of France. I have been to the Grotte (cave) de Niaux, the Grotte de Pech Merle, and the Font de Gaume cave. Unfortunately, I have been stubborn in not wanting to see the replica of the Grotte of Lascaux. I understand that although it is a duplicate of the now closed cave, it is just as awe inspiring. Through radiocarbon dating of the charcoal, scientists know the art in these caves in is at least 14,000-17,000 years old. 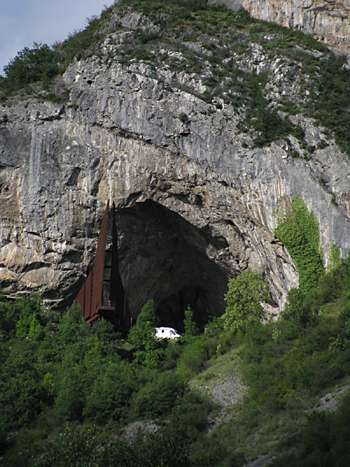 My favorite is the Grotte de Niaux. I have visited it two times and each time I have found it mysterious and grand. I was there last summer and was compelled to paint two canvases (below) that to me represent the opening of the cave. I was not compelled to try to copy or incorporate the beautiful drawings inside the cave. To me, they are “unduplicatable” due to their spiritual quality. They are wonderful prehistoric cave paintings 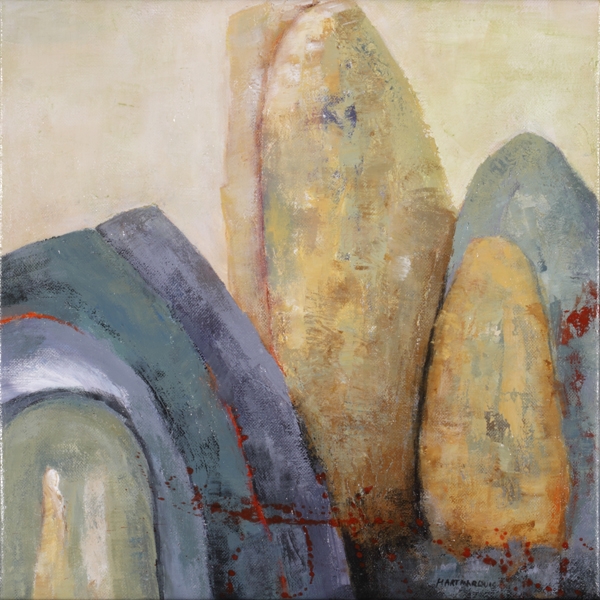 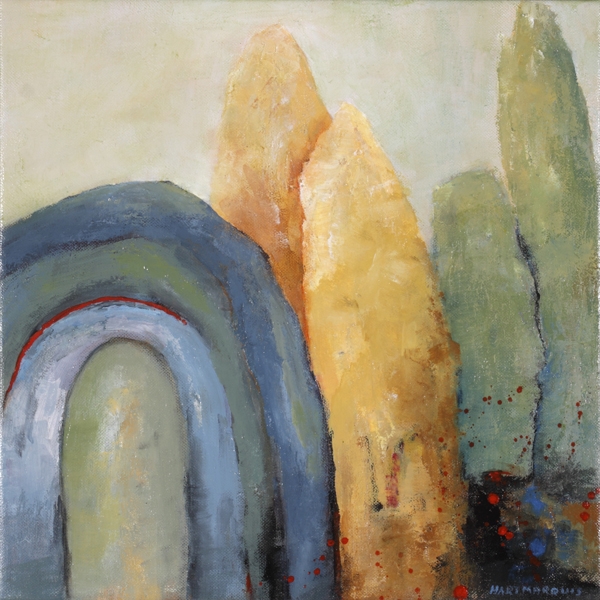