When I create a composition, I have noticed that I usually paint objects such as trees in groups of three or an odd number of subjects. Frequently I will paint just one subject like a lone tree. I did a little research about the meaning of numbers recently because I have known that three is considered especially sacred or psychologically meaningful. An explanation of the significance of the number three can be found in different cultures around the world, in tarot and in many religions.

One symbolizes unity, agreement, simplicity. When something exists alone, nothing disturbs it. It remains completely at peace, without regard for anything else. Two symbolizes duality, tension and complexity. It is noted that the number three symbolizes a harmony that includes and synthesizes two opposites; three merges the two to create a new entity, one that harmoniously includes both opposites. Or three can unite two objects while excluding the third. Here ( Italian Cypress) is a painting that I did several years ago without understanding the symbolic meaning of three. 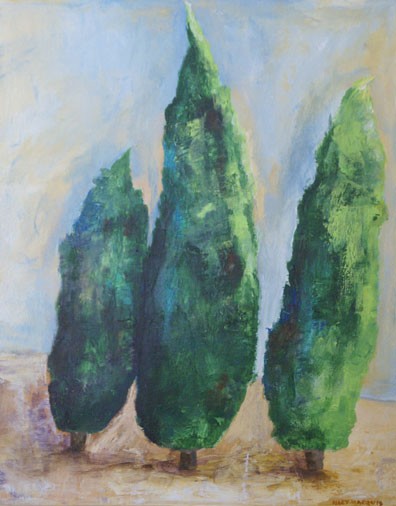 In some Asian religions three gets its roots from the meaning of multiplicity. Three is a moving forward of energy, overcoming duality, expression. There is a manifestation of something new and a synthesis. Three is also the first number to which the meaning “all” was given, it can also mean “a few.” It is the triad, being the number of the whole as it contains the beginning, middle and an end; past, present, future. 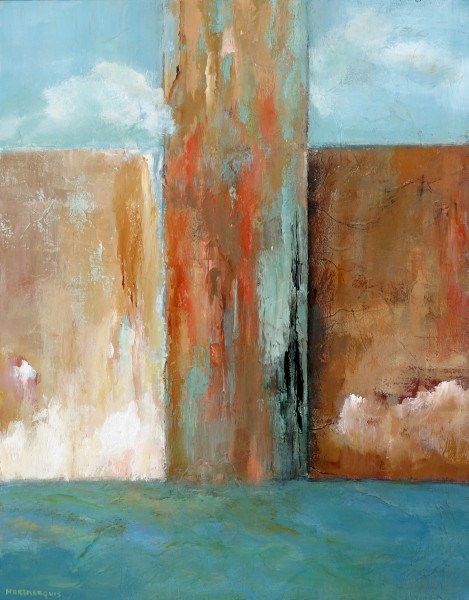 In design and interior decorating, the Rule of Three is a principle used in various aspects of design:  architecture, graphic design and photography (the rule of thirds). The basic idea of the rule is that details and objects that are arranged or grouped in odd numbers are more appealing, memorable, compelling and effective than even-numbered pairings. It seems probable to me that this principle in design originated in classic art such as The Three Graces by Raphael (1500), “The Virgin and Child with St. Anne, (1510) and  Primavera by Botticelli, (1402). 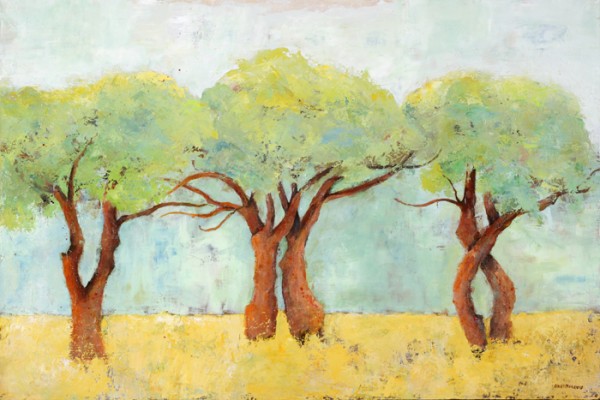 There is nothing “classic” about my art, but I do like to paint compositions with odd numbers. How about you? Do numbers have symbolic meaning in your art?